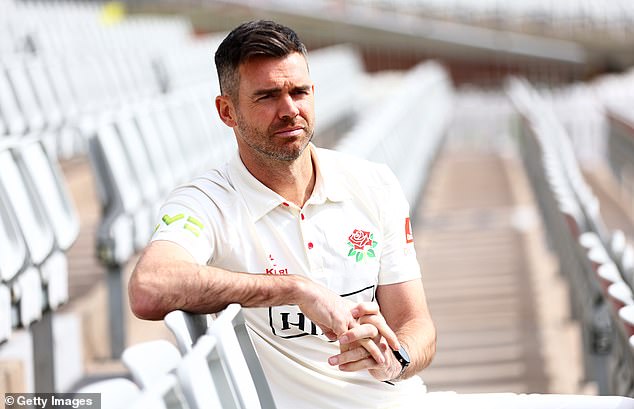 Jimmy Anderson reveals he considered QUITTING cricket after England snub, but the support of his family spurred him on – and veteran insists there’s ‘no animosity’ between him and ex-captain Joe Root as he targets Test recall

By Lawrence Booth for MailOnline

Jimmy Anderson has insisted there is ‘no animosity’ between him and Joe Root after England’s record wicket-taker was controversially omitted from the tour of the Caribbean earlier this year.

But he admitted the decision, made before Root quit as Test captain, led him to question his enthusiasm for the game – and left him wondering whether he had done something to upset his team-mates.

It followed tensions during the Ashes, when Root openly criticised the lengths England had bowled during the second Test at Adelaide.

Anderson is hopeful that the new regime of Brendon McCullum and Ben Stokes will find room him in next month’s three-Test series against world champions New Zealand. And he warmed up in pointed fashion by bowling Root for four on Sunday during the county championship match between Yorkshire and Lancashire at Headingley. The wobble-seam delivery left only leg stump still standing.

‘We’ve not fallen out or anything,’ he said. ‘We chatted [during the game], and I spoke to him before he announced that he was stepping down. So there’s still a huge amount of respect between the two of us, and there’s no animosity.’

Did he say anything to Root after dismissing him? ‘Absolutely not, no. I didn’t need to: just pick the two stumps off the ground.’

Anderson, who turns 40 in July, says he briefly questioned whether he wanted to carry on after the West Indies omission, but added: ‘I talked it through with my family, and they saw it as I did – that I feel like I’ve got more to give to the game.’ 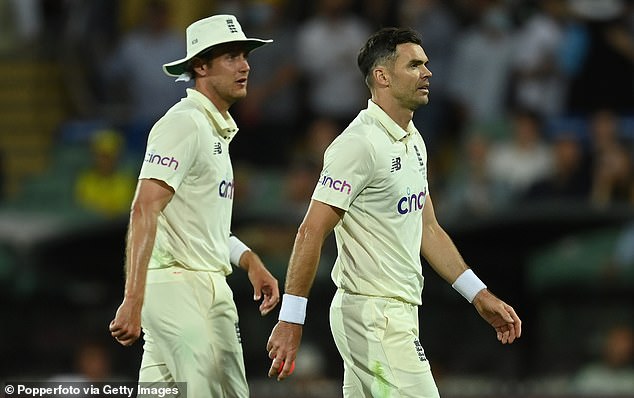 Even so, he admitted he had still not received a meaningful explanation for why a player with 640 Test wickets to his name, and still at the peak of his powers, should have been dropped.

‘I felt like I bowled well in Australia, and I guess you do start questioning other things when that happens: is it something I’ve done around the group, or whatever else?

‘I’ve got to try and prove that I’m still good enough to play international cricket, and keep my fingers crossed that the selectors and the captain think so as well.

‘I think I bowl a good length, but if people want me to bowl fuller, I’ll bowl fuller. I find it hard when you’ve got a certain amount of wickets – I’ve done that through bowling the right length on the right wicket. I think I’ve got quite good at that, but obviously I’m open to suggestions if anyone wants to help.’ 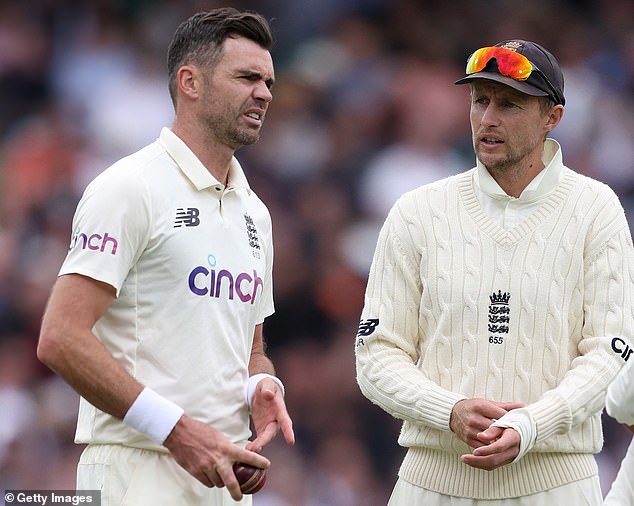 Anderson has started the season well for Lancashire, picking up 11 division one wickets at 19 apiece, and conceding less than two an over. And he said he would happily carry on bowling for his county in the unlikely event England decided his Test career was over. But it seems inconceivable that Stokes will need convincing of his Test credentials – and the feeling is mutual.

‘He’s a natural leader and the lads all look up to him in the dressing-room,’ said Anderson. ‘When he’s had the opportunity to be captain… I think there was maybe an hour in Australia, and you could see he’s got a real good tactical brain on him. He’s the hardest trainer in the group and sets the example of how to be an international cricketer.

‘With Brendon and Ben, we’re never going to take a backward step. It could be a really exciting time for English cricket.’

Meanwhile, Anderson confirmed suspicions that this season’s batch of Dukes has not been up to scratch, with county attacks repeatedly asking for the ball to be changed during the first six rounds of matches.

‘There’s obviously something wrong with the balls. Everyone’s said it – the umpires around the country have said it, and all the teams. There’s rumours something’s going to change for the next round of county matches, so let’s just hope the next batch is a good one.’

James Anderson and other England cricketers surprised Leicester Electricity Sports Cricket Club during an inter-squad friendly game organised by Test partners LV= Insurance. The club will receive support to train a new coach and relaunch their women’s team as part of LV= and the ECB’s commitment to support 4,000 coaches through their #Funds4Runs community initiative. Visit https://www.lv.com/gi/cricket-funds4runs for more information.