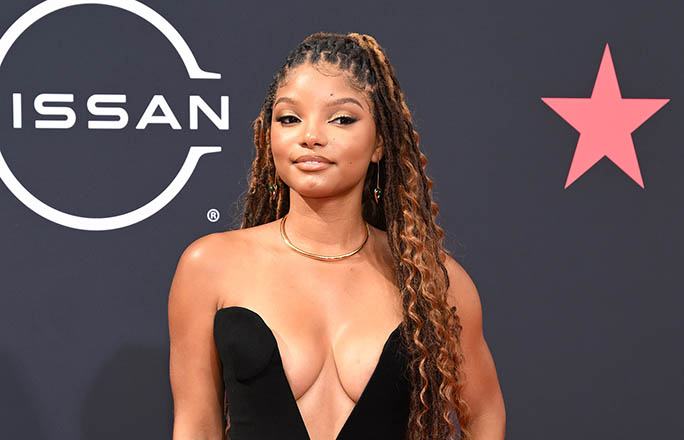 The actress sat down for an interview with Variety to discuss her role as Ariel in the upcoming “Little Mermaid” live-action movie. For the shoot, Bailey was styled in a sleek sea green ensemble. The 22-year-old was dressed in a geometric dress with a structured silhouette.

The top featured a bow shape and was reminiscent of Ariel’s seashell top. On the bottom, she wore a matching green high-waisted skirt with a curved shape at her hips. The bottom cut off just above her ankles, leaving room to show off her towering footwear.

The shoes featured a super-high platform and triangular shaped heel; the incorporated a transparent base and was covered with orange and blue swirls across the sole, heel and toebed upper. The straps clasped around her ankles and were printed with yellow polka dots.

For her second look, the star looked angelic in all white. The ensemble featured a white high-neck crop top with ruffle detailing, which was paired with a lightweight white skirt that tied at her side. For footwear, she slipped into a pair of sleek glass slippers with a trendy modern flair. Much like her first pair, the see-through shoes featured a thick block sole that gave her height and elevated the look. The barely-there sandals also featured a thick strap around her ankles with a a silver clasp.

During the interview, Bailey discussed the importance of her position as only the second Black actress to be crowned a Disney princess. She noted, “I want the little girl in me and the little girls just like me who are watching to know that they’re special, and that they should be a princess in every single way,” Bailey says. “There’s no reason that they shouldn’t be. That reassurance was something that I needed.”

Flip through the gallery to see Halle Bailey’s Style Evolution