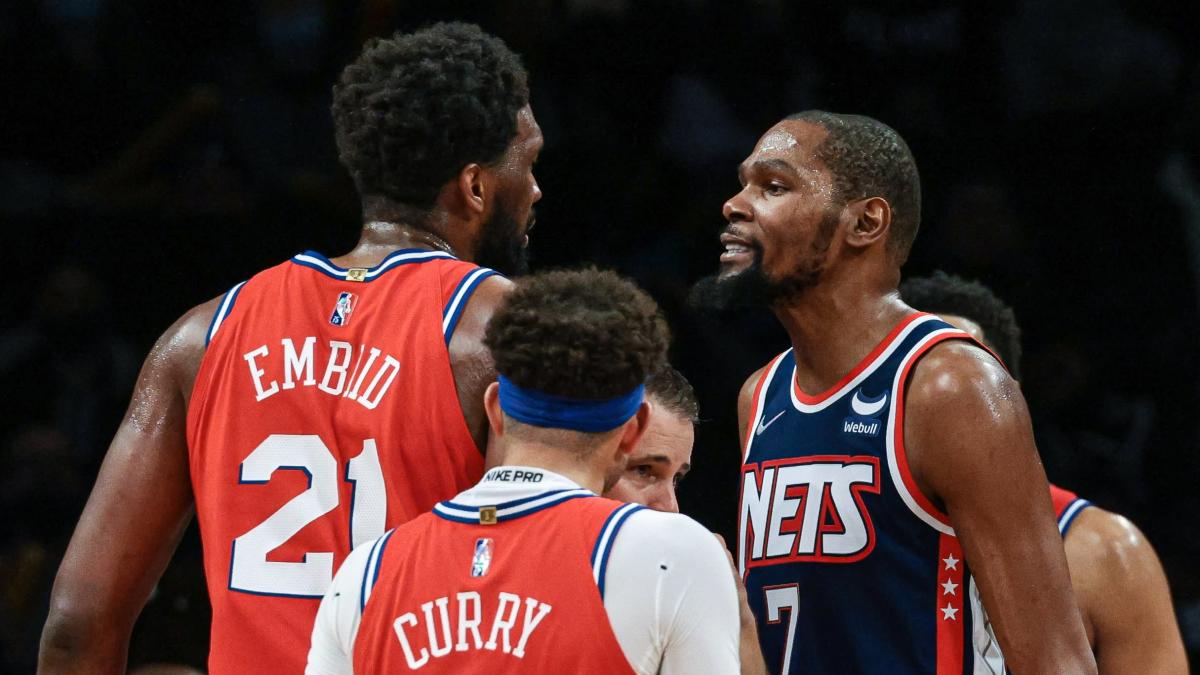 The Kevin Durant trade-or-not-trade scenario has gone through roughly 100 iterations by now, and it still seems like the superstar has his qualms about returning to the Brooklyn Nets next year.

The teams initially believed to be in the Durant trade race – the Heat, the Suns, maybe the Raptors – are all likely still invested, as well as the Celtics who shook up the waters earlier this summer with a reported Jaylen Brown offer.

But how about… the Sixers?

According to SNY reporter Ian Begley, the Sixers have some legit interest (duh) in a Durant trade – and the future Hall of Famer reciprocates that interest:

“Something worth noting: As of earlier this week, there were high-ranking members of the Sixers who’ve felt strongly about engaging with Brooklyn on a Durant trade.

“It is unknown if Brooklyn and Philadelphia have made any recent progress on a trade.

“The Sixers would almost certainly have to include Tyrese Maxey in a trade for Durant. Given the dynamics at play, you’d think that Tobias Harris, Matisse Thybulle and other players/draft picks would be included.

“Previous reports stated that the Suns were at or near the top of the list of teams Durant would like to be traded to. An offseason trade to Phoenix seems unlikely due to the DeAndre Ayton signing. So what happens now? Well, it’s worth noting that, in addition to Boston, Durant also sees Philadelphia as another desired landing spot, per people familiar with the matter.

“Depending on the players and picks involved, you could see either the Celtics or Sixers satisfying Brooklyn’s wishes in a Durant trade.”

The key line in that report is this one: “…Durant also sees Philadelphia as another desired landing spot.”

The key with any Durant trade, because of the player’s stature in the league, his financial stability thanks to years and years of making big bucks, and his power as a power broker in the league is that Durant lands on a team he actually wants to play for. No team is going to deal for Durant, despite the multiple years left on his deal, without knowing he’ll play out those years in that city. Otherwise they’re tossing assets down the drain in exchange for a holdout headache.

If Durant really would play the next few years in Philly… you absolutely have to think about it. I know, I know, Tyrese Maxey is a future star and the city loves him.

But this is Kevin Durant!

And while he turns 34 next month, Durant is showing no signs of slowing down as an offensive monster. Can you imagine a Big Three of Durant, James Harden, and Joel Embiid? It would be the most talented Big Three in NBA history – not best, not most winning, but absolutely most talented. Two of those players have already won MVP, and the third has been runner-up in back-to-back seasons.

Durant averaged 29.9 points, 7.4 rebounds, and 6.4 assists per game last year. He shot 51.8% from the field, 38.3% from deep, and 91% from the free throw line. He’s an absolute assassin, as unguardable an offensive threat as the league has ever seen. Pairing him with a pass-first Harden and working an inside-out game with the most physically dominant center in the NBA in Embiid? Good luck, folks. It’s a wrap.

Here’s a trade that works, per ESPN’s trade machine:

Now, the Nets would want draft picks and perhaps another role player in return. The Sixers’ fungible first-round draft picks are severely limited because of the Tobias Harris and James Harden deals, but they can make something work… probably. The only hold-up here could be the way the Rudy Gobert trade totally shook up the NBA trade market. It’s going to be hard to get fair value in return for Durant, but the Nets have to know that. If he’s gone, you get the best you can get and cut your losses.

Will it happen? I have no idea. I have no clue what’s going on.

But should the Sixers try to make it happen? Absolutely.