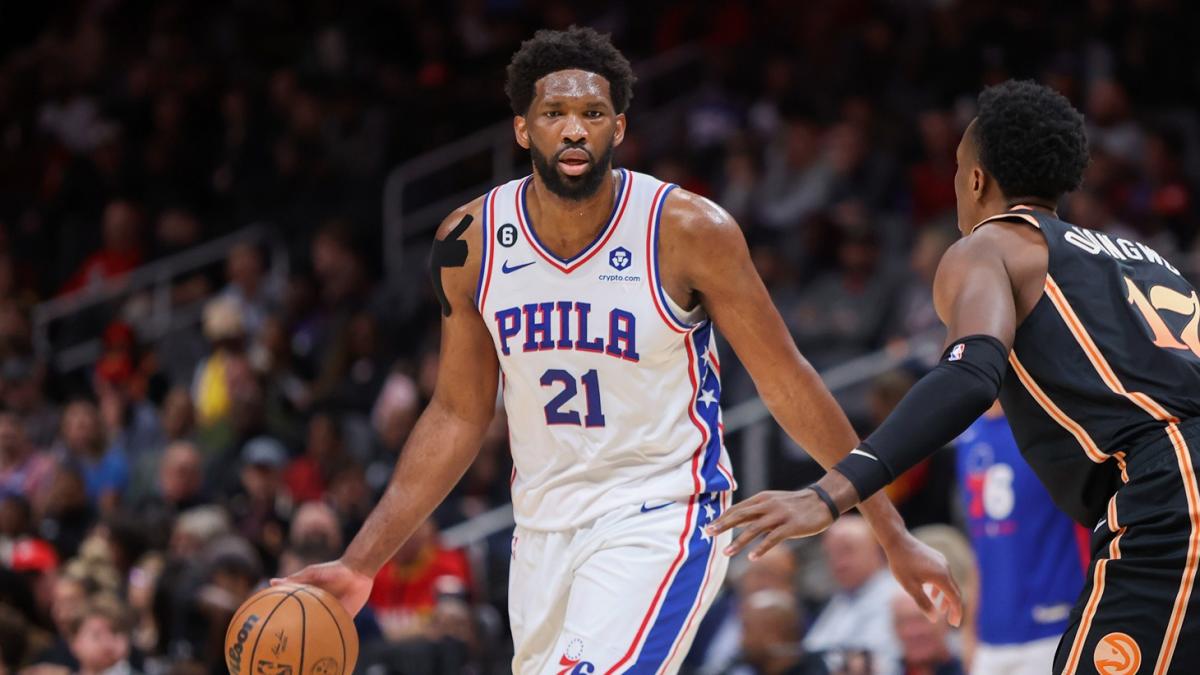 Looking to build on their highest-quality victory of the season, the Sixers failed Thursday night in Atlanta.

In their first action since a home win Monday over the Suns, the Sixers lost a 104-95 game to the Hawks at State Farm Arena.

The 5-7 Sixers will travel back to Philadelphia and face Atlanta again on Saturday night. Here are observations on their loss Thursday:

The Sixers got Tobias Harris a post-up on their first play and he knocked down a turnaround jumper.

From there, the team ran just about everything through Embiid. Early results were mixed for the five-time All-Star, who had black tape on his right shoulder area Thursday night. Embiid sandwiched a nice dish to P.J. Tucker for a corner three between two turnovers.

After playing an abbreviated opening stint Monday in his return from a three-game absence with a non-COVID illness, Embiid got a longer run to start the night. That allowed him to go against backup Atlanta center Onyeka Okongwu for a few minutes. He hit a foul-line jumper that gave him 11 points on 4-for-6 shooting in the first quarter, then subbed out with 3:27 left.

Paul Reed again began the game as the Sixers’ backup center, and he struggled early on to handle the Young-Capela pick-and-roll combination. The 23-year-old was more aggressive than Embiid in his pick-and-roll coverage and didn’t strike the right balance between high-energy, disruptive defense and picking up quick fouls. He was called for two personals almost immediately, Young went 9 for 9 at the foul line in the first quarter, and the Hawks ended the period on an 11-0 run. The Sixers’ offense was poor with Tyrese Maxey and Embiid both on the bench, though Reed did at least contest an air-balled three-pointer from Young at the first-quarter buzzer.

The Sixers opted for small ball in their Embiid-less minutes during the second quarter and most of the third. Embiid’s fourth foul with 7:07 left in the third made winning on a gruesome offensive night much harder.

While Embiid has familiarity with the “point-center” role from last season, spacing and chemistry problems hurt the Sixers. Danuel House Jr., who returned after two games out with the flu, made a second-quarter entry pass into Embiid. He then moved from where Embiid expected him to be on the left wing and the big man committed a turnover, one of his seven giveaways. On another play, House stationed himself directly next to Shake Milton in the corner.

Embiid is responsible for making sharp, sensible decisions, but the frustration he showed at times in Atlanta was somewhat understandable. His teammates need to consistently be in the correct spots, and to hustle there before defenders swarm Embiid.

Still, it doesn’t help anyone when Embiid’s body language is negative. That’s not remotely close to the primary reason the Sixers lost; the bottom line is the team outscored the Hawks by 10 points in his 32 minutes. However, it didn’t look good early in the fourth quarter when Embiid jogged back on defense following a missed layup, or when he threw his hands up after Dejounte Murray intercepted his perimeter pass intended for Harris. Atlanta’s lead ballooned to 20 points on an Okongwu dunk.

Coming off of a 14-for-47 stretch from the field over his last two games, Maxey didn’t have the luxury of easing into the evening with a comfortable defensive assignment.

He guarded Young and didn’t start well, letting the All-Star guard find opportunities to drive downhill and put the Sixers’ defense in vulnerable spots. Maxey also was short on a couple of three-point tries and bit on a Young pump fake after allowing the relatively diminutive guard to grab his own missed floater. Young passed Sixers head coach Doc Rivers for 16th on the all-time Hawks scoring list in the first quarter.

Both the Sixers and Hawks had woeful starts from long range. The teams combined to shoot 3 for 25 from three-point territory in the first half. Offense not involving the Young-Capela duo or Embiid was generally very inefficient. Harris (12 points on 5-for-15 shooting, five steals) had his hands on his head after blowing an uncontested layup late in the second quarter.

Maxey looked best when he accelerated off of drag screens. His lobbed assist to Embiid capped a 7-0 Sixers run in the first quarter that put the team up 16-14. It clearly makes sense to feature the Maxey-Embiid pick-and-roll more without Harden. On one play in the second, Embiid halted a possession to ensure the Sixers set that look up properly. Maxey fed him on the short roll and Embiid drew two free throws. Frequent Maxey-Embiid actions early in the shot clock don’t appear realistic right now given Embiid’s well-documented conditioning issues, but the Sixers should still be capable of purposeful, organized half-court offense that involves Maxey. Rivers, Maxey and Embiid all need to prioritize that over the next few weeks.

Maxey played one of his worst stretches in recent memory early in the third quarter. He tried to draw a whistle but didn’t receive the call on a difficult leaner attempt. On Atlanta’s ensuing trip, he allowed Young to slide past him into the paint without any resistance. The Sixers were fortunate Capela missed a layup, and Maxey had a chance to play in the open floor. He dropped a pass off to Harris, who came up empty inside. The Sixers’ transition defense was then practically non-existent, leading to a De’Andre Hunter layup attempt that gave the Sixers a 53-46 edge. Rivers called timeout.

The Sixers shouldn’t count on Maxey for all of their positive energy, but it is noticeable (and rare, to his credit) when he’s slumping and doesn’t show his usual zest for the game. He at least kept attacking on offense and saw a few shots fall in the second half, finishing the night with 15 points on 5-for-17 shooting, five assists and four rebounds.

De’Anthony Melton also didn’t have a strong showing offensively (five points on 2-for-7 shooting), though he began the game on Murray and effectively limited his scoring chances. Melton also pulled down 10 rebounds, second on the Sixers behind Embiid.

The Sixers stuck Melton on Young to open the second half. Although Young’s deep range didn’t hurt the Sixers much — he went 2 for 8 from three — the 24-year-old made a catch-and-shoot corner three over Melton on Atlanta’s first possession of the third period.

While Melton received 29 minutes, Matisse Thybulle only got four over the first three quarters. His lone three-point attempt was a miss with 14.1 seconds left and the game essentially wrapped up.

The sweet shooting Georges Niang displayed in a 21-point outing against the Suns deserted him. Niang shot 1 for 7 from long distance and also let a defensive rebound slip from his hands late in the third, eventually leading to a Justin Holiday three that extended the Hawks’ lead to nine points. Soon after, a long two-pointer from Young over Reed stretched the Sixers’ deficit to 14. Capela expectedly feasted with Embiid in foul trouble, but that obviously doesn’t excuse all of the Sixers’ miscues.

Rivers removed his starters with 4:31 to go in the fourth and the Sixers improbably made the Hawks sweat a tad using a lineup of Milton, Thybulle, Furkan Korkmaz, Reed and Montrezl Harrell.

In just over three minutes of playing time, Harrell scored eight points on 3-for-3 shooting, grabbed two rebounds, and drew a charge. His short hook shot cut the Sixers’ deficit to 100-93 with 2:24 remaining, and Rivers was ultimately swayed to bring Embiid, Maxey and Harris back.

The late push from the Sixers’ second-unit players was positive, though those few minutes never seemed likely to erase all the problems that preceded it. Better three-point shooting would help plenty, but the Sixers will need a significantly improved effort across the board to beat the Hawks on Saturday.