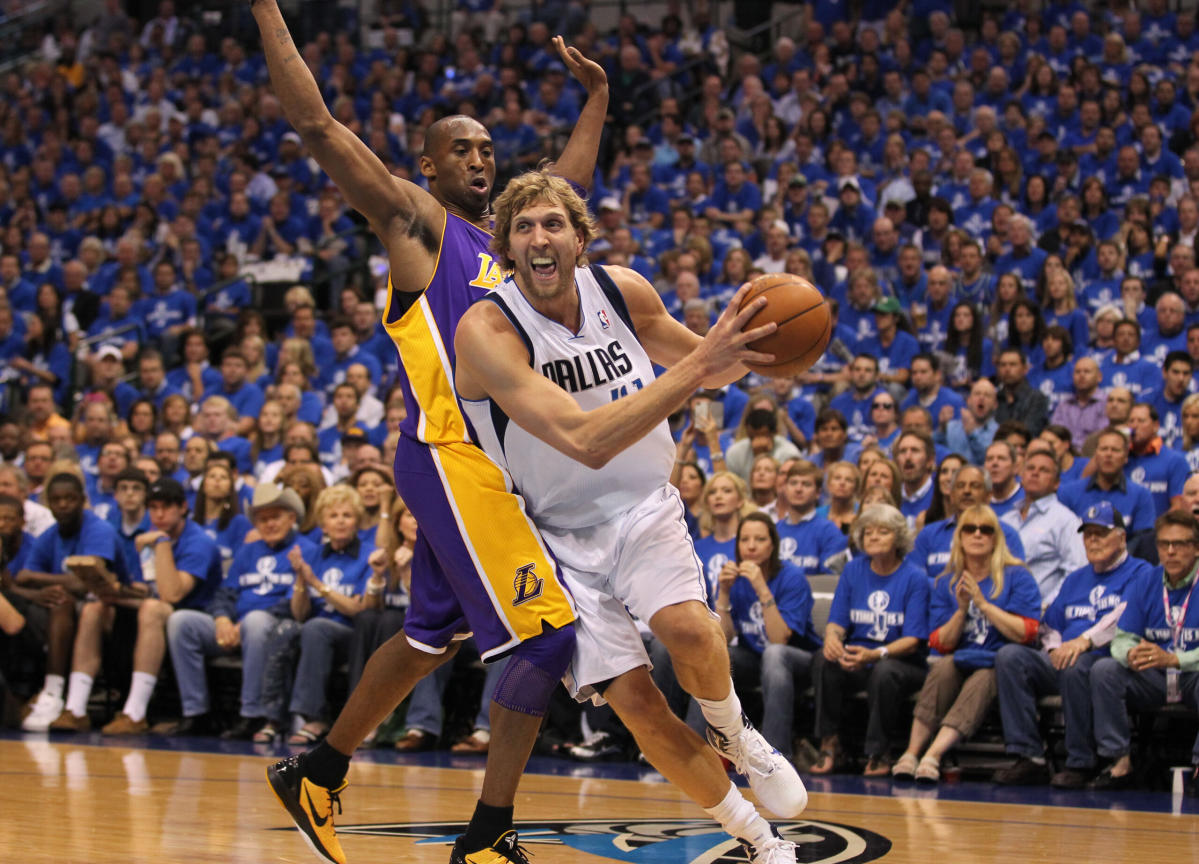 There are few bigger honors in major professional sports than spending your entire career with one team. That usually means not only are you loyal to the franchise or club, but they are loyal to you back. And in a day where all that matters in pro sports are winning and revenue, those franchises valued you for a reason, probably because you were an all-time great at the sport.

In some cases, the player that honor belongs to remains active, opening up the possibility they eventually play for another team. In those cases, we included the inactive one-franchise player with the most games played.

A Hall-of-Fame big man, Bob Pettit’s numbers are almost hard to believe, leading the league in scoring twice and guiding the Atlanta Hawks to a championship in 1957-58.

Jan van Breda Kolff did play his entire NBA career with the Nets but he also had a two-season stint in the ABA prior to that, suiting up for Denver Nuggets (before they joined the NBA), the Virginia Squires and the Kentucky Colonels over that stretch.

A two-way force on the wing, John Havlicek played a major part in nearly half of the Boston Celtics’ 17 championships, winning eight of them, even winning Finals MVP for one of them. He spent his entire lengthy career rocking the infamous Boston Celtic green.

It shouldn’t come as a surprise but as a small-market franchise, the Charlotte Hornets haven’t had many players stick around for very long until recently. In fact, the three players who have played the most games for their franchise without playing for another team are currently active: Miles Bridges, PJ Washinton and Cody Martin. As such, Tony Bennett – yes, the current Virginia Cavaliers NCAA men’s basketball head coach – is the inactive player with the most games played for Charlotte without playing for another NBA team.

A role player through and through, Tom Boerwinkle was a steady rebounding presence with the Chicago Bulls for a decade, never playing for another NBA team. It’s a shame this spot doesn’t go to Michael Jordan, however, as the six-time champion should have spent his entire career as a Bull and not had the late-career resurgence in Washington. Oh, well.

Who knows if Brad Daugherty would have played for another franchise had his back not given out on him and ended his career by his age-29 season, two years removed from his final All-Star appearance? The premature ending to his career was unfortunate for sure, but it means that Daughtery, a five-time All-Star and an underrated player historically, goes down as the best Cleveland Cavaliers player ever to not have played for another franchise.

One of the three greatest modern-era one-franchise players along with a guy coming up later for a certain purple-and-gold franchise and an all-timer at power forward, Dirk Nowitzki spent his entire Hall-of-Fame, game-changing career with the Dallas Mavericks, where he won a championship, made 14 All-Star appearances and made 1st Team All-NBA four times

Dan Issel is another one of the ABA-gone-NBA guys who technically did play for more than one franchise, just not another NBA franchise. The Hall-of-Famer originally played for the Colonels before joining Denver in its final ABA season, transitioning to the NBA with the franchise and making one NBA All-Star appearance over the final nine seasons of his playing career.

An important scorer and defender for the Detroit Pistons dynasty of the late 1980s, Joe Dumars never suited up for another team, playing over 1,000 games for the proud Michigan-based franchise until 1998-99.

In all likelihood, Stephen Curry will be the one-franchise player with the most games played for the Golden State Warriors in their history when it’s all said and done. But because he’s still active and there’s at least a chance he signs elsewhere before retiring (Charlotte, maybe?), we also had to include Hall-of-Famer Paul Arizin, who missed two seasons with the then-Philadelphia Warriors not due to injury or playing in another league, but because he served as a Marine in the Korean War.

Undersized even for a guard, Calvin Murphy was ahead of his time as a 5-foot-9 bucket-getting ball-handler who was lightning fast and had a deadly layup package down low.

One of the greatest – and most clutch – shooters the league has ever seen, Reggie Miller is Indiana Pacers basketball. To this day, Miller is one of the first players people think of when they talk about the Pacers’ franchise.

Despite playing in an enormous market, the Los Angeles Clippers have always been the city’s second fiddle as far as NBA franchises, making it –  historically – not much of a free-agent destination or a club that keeps its stars for very long. That seems to be changing recently but even then, the Clippers won’t be taken seriously until they win a championship. As such, Lancaster Gordon, whose NBA career spanned from 1984-85 to 1987-88 with the 2-guard never having averaged more than 7.5 points, is the one-franchise player with the most games played for the Clippers.

Along with Nowitzki and a power forward coming up later, Kobe Bryant is one of the two greatest one-franchise players in NBA history – with a strong argument to be considered the best in his own right. Bryant brought five champions to Los Angeles, won an MVP, was an 18-time All-Star and an 11-time 1st Team All-NBAer, sticking around through tough times post-Shaquille O’Neal, though he did request a trade at one point. Luckily for basketball fans, that trade request wasn’t fulfilled as Bryant spent his entire illustrious career with the Lakers, where he belonged.

“Big Country” Bryant Reeves didn’t enjoy a spectacular career but he was a popular player thanks to his size, a 7-footer weighing nearly 300 pounds in his heyday, and his effective, albeit ground-bound play out of the post. Weight issues and injuries eventually ended his career prematurely, but Reeves spent his entire six-season career with the then-Vancouver Grizzlies and was quite solid for three of them.

When it’s all said and done, Udonis Haslem will take over this spot on his own, as the Miami legend has already said this will be his final NBA season. For now, he shares the spot with Keith Askins, who spent his nine-season NBA career as a role player for the Heat. Haslem is one of three players ever along with Bryant and Nowitzki to spend 20 seasons with one team.

If Giannis Antetokounmpo does spend his entire career with the Milwaukee Bucks, he’ll immediately catapult himself into the Nowitzki/Bryant/Duncan strata of best all-time players to spend their entire careers with one franchise. And after he signed an extension with the Bucks as opposed to testing free agency as many expected, the odds of him doing just that started to look more plausible.

He wasn’t the player Karl-Anthony Towns is, but Nikola Pekovic was a fan favorite in his day, a bruising big man with brute strength and soft touch down low who could gobble up double-doubles. If Towns ends up playing for another team in his NBA career, Pekovic isn’t a bad one-franchise player for the Minnesota Timberwolves.

The New Orleans Pelicans didn’t leave us with many options as a younger, small-market franchise without much history. In fact, the five players with the most games played for them (without the player having played for another NBA team) are all currently active: Hayes, Naji Marshall, Zion Williamson, Herb Jones and Kira Lewis. The Pelicans would probably love it if one day, they can say Williamson is their one-franchise player with the most games played for New Orleans.

Bill Bradley was a reliable role player on the last two New York Knicks championship teams. Fun fact: along with Manu Ginobili, Bradley is one of two players ever two win Olympic gold, an NBA championship and a Euroleague championship.

Fred Brown was a solid scorer who could get hot quickly, spending his entire 13-year NBA career with the then-Seattle SuperSonics. Brown as an important role player on the last Sonics team to win a championship back in 1978-79.

The Magic run into the same issue as the Pelicans for this exercise: The five one-franchise players with the most games played for Orlando are all active. Leading the pack is Mo Bamba, trailed by Jonathan Isaac, Chume Okeke, Cole Anthony and Franz Wagner. That’s especially shocking considering a few of those guys are in their second pro seasons. The Magic will hope Paolo Banchero can take over this spot one day.

Hal Greer spent 15 illustrious with the Philadelphia 76ers franchise, dating back to the days when the team was called the Syracuse Nationals, a stretch that lasted until 1962-63. The Hall of Famer was a 10-time All-Star, a seven-time 2nd Team All-NBAer and helped lead the team to a championship in 1966-67.

He was never a superstar in the NBA but Alvan Adams was a fine role player over his 13 seasons with the Phoenix Suns, playing a major part in the Suns reaching the playoffs in nine of those campaigns. A big man with shooting touch from the outside, Adams was a steady presence down low for many years in Phoenix.

Portland Trail Blazers fans will hope once Damian Lillard retires, he’ll still be the player at the top of this list. However, if he moves on, the honor would go to Larry Steele, a nine-year role player who spent his entire career with the Blazers in the ’70s.

Playing first for the Rochester Royals and then the Cincinnati Royals, Jack Twyman put up a Hall-of-Fame career with the now-Sacramento Kings, making six All-Star appearances in the process.

Considered by many the greatest power forward of all time, Tim Duncan spent 19 seasons with the San Antonio Spurs, played nearly 1,400 games with the franchise and averaged nearly 20 and 10 during his time there, leading San Antonio to five championships in the process while taking home two MVP awards.

The Toronto Raptors don’t have a great history of keeping their homegrown superstars (Vince Carter and Tracy McGrady, anyone?), a trend they will be hoping to buck with Pascal Siakam. However, there was some trade chatter surrounding Siakam just a couple of seasons ago, so even him becoming Toronto’s one-franchise man isn’t a sure bet. If Siakam does move on at some point, this honor would go to Lucas Nogueira, who never lived up to his potential in the NBA.

One of the greatest pure point guards ever, the all-time league leader in assists and steals – neither record of which looks particularly breakable –  John Stockton spent nearly 20 seasons with the Utah Jazz, reaching the NBA Finals twice in the late ’90s, though falling both times to Jordan and Co.

Playing for the Baltimore Bullets, Capital Bullets and Washington Bullets, Wes Unseld, father of current Washington Wizards head coach Wes Unseld Jr., was an all-time great for the team, winning a championship in 1977-78, as well as an MVP trophy almost a decade prior to that. He now resides in the Naismith Hall of Fame.