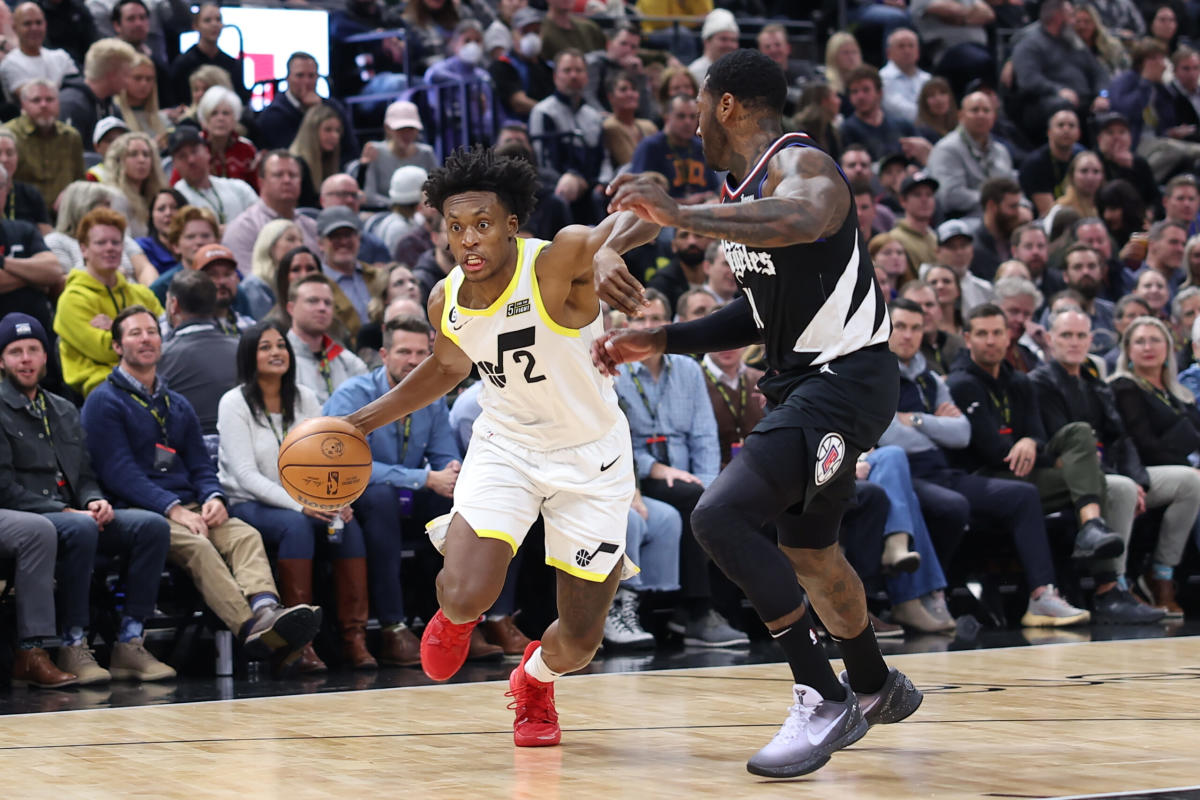 For more interviews with players, coaches, and media members, be sure to like and subscribe to the HoopsHype podcast on Spotify, Apple Podcasts, and anywhere else you listen to podcasts. Listen to the podcast above or check out some snippets of the conversation in a transcribed version below.

Gozlan: I would keep an eye on John Wall because out of all the guys making decent money that have a decent tradable salary, he seems like the most expendable to me. Even though Robert Covington, for example, might be out of the rotation when the team is fully healthy, I still see the Clippers keeping him as insurance. Wall has brought an element of transition that the Clippers haven’t had and gets to the line a lot. He’s been fine in limited minutes, but his 27 percent from three can potentially be an issue for what they’re trying to accomplish in the playoffs. If they feel they can do better at backup point guard, that’s where they could probably move his $6.5 million salary to get that guy.

Scotto: The Clippers have been rumored to be in the market for a big man and were linked to Myles Turner, but I don’t see that happening currently, given how well Indiana has played, and Ivica Zubac is averaging a double-double. Some executives I’ve spoken to wonder if Turner will be as available as he was in the past, given Indiana’s hot start.

Point guard is a position the Clippers could potentially look to upgrade. Wall’s salary at the taxpayer mid-level exception range makes him a potential trade chip, but I think the Clippers would need to feel like it’s a notable upgrade at any position to make a move. They believe they’re a championship contender with this roster and a healthy Kawhi Leonard and Paul George.

Gozlan: One guy I’ve kept my eye on as soon as the contract was signed is Collin Sexton with Utah… While I’m sure they view him as a potential contributor for the next great Jazz team, I also feel with that contract, even if he projects to top out as a high-end backup in his current role right now, I think you can look at him now as a potential asset flip in the future if the right deal comes along. There’s no rush to move him right now. They’re still playing well. I think that’ll come down a bit more.

Scotto: Danny Ainge wanted to give Will Hardy an opportunity to have a group of guys he could work with and develop a culture there, especially as a first-year head coach. I’ve heard Utah has been impressed with Lauri Markkanen. It would take a lot for Utah to trade him. Utah also wants to extend Jordan Clarkson, who owner Ryan Smith likes a lot. The rest of the roster is expendable, including Sexton, as you mentioned, especially with Utah coming back down to earth following the team’s hot start.

Utah and Indiana are two teams that, in a way, have kind of screwed up the trade market a little bit because they’ve gotten off to such good starts, but the pendulum should swing back the other way.

Scotto: When Dallas offered JaVale McGee his contract and his starting spot in free agency, the Mavericks had high hopes for him, but his production hasn’t materialized, and he’s been out of the rotation lately. If Dallas is going to acquire another center, he’d have to be an upgrade defensively and a contrast to Christian Wood, I’ve heard.

Gozlan: I agree. I wrote about him a couple of weeks ago on HoopsHype about players that aren’t in the rotation that should be available in trades. He went from starting at center to out of rotation. Now, Dwight Powell is back in favor. McGee has two years left, including a player option in the third year. He’s had a nice second-half resurgence in his career, but a big part of his value has been the short-term deals he’s been on. It’ll be tough for Dallas to move him in Year 15 of his career with all that money left over.

Scotto: Miami has had interest in trading for Suns forward Jae Crowder. Moving Caleb Martin theoretically would work financially, and Miami has enough shooting in Max Strus, Duncan Robinson, Tyler Herro, and Gabe Vincent, where the Heat could withstand losing Martin. The question is if Phoenix wants to take on additional salary in the years to come.

I’ve heard from some executives that Phoenix doesn’t want to take on much additional salary, if at all, ideally if Crowder is moved, and they’d like a forward back.

Gozlan: I think that’s something that could make a lot of sense for both teams… The Suns need someone to replace Crowder, who’s not playing, and with Cam Johnson’s injury right now… Martin or maybe Victor Oladipo, who’s eligible to be traded next month.

Scotto: Many NBA executives I’ve spoken to around the league are closely monitoring the Bulls since they’ve underwhelmed so far and Lonzo Ball’s health is a major question mark. There’s a lot of interest in DeMar DeRozan across the league. Nikola Vucevic is a name I believe that’ll pop up in trade rumors. His value since coming to Chicago has gone down comparatively to when Chicago made that blockbuster trade to get him. Some teams will have interest in Zach LaVine as well.

With that in mind, two guys that are eligible to be traded after December 15th that I’m looking at are Goran Dragic and Andre Drummond because both guys are veterans who can help a playoff team looking to make an upgrade for depth.

Gozlan: Dragic is on a minimum deal, and Drummond is owed $3.2 million. It shouldn’t be hard to move either if the Bulls decide to go in another direction. Dragic hit the buyout market last season.

Scotto: One thing that surprised me with Chicago was the timing of the report of the Billy Donovan extension that was done a while back (before the season). Chicago’s been underwhelming, and that gets out there now. What was the reasoning behind that? Was it to quell some things there, or is there something internally going on? Those are some things I pondered.

Scotto: After waiving Matt Ryan, some executives are wondering if the Lakers will look to make a roster upgrade around the edges, given Russell Westbrook’s production off the bench for the team, and they’ve been hot lately over their last 10 games.

Gozlan: Particularly the ones out of the rotation, like Damian Jones and Juan Toscano-Anderson will naturally be available, and maybe the Lakers can offload them for some luxury tax relief or be included as add-ons for a salary in a Westbrook or Pat Beverley trade… DeMar (DeRozan) would be very interesting.

Scotto: The Wizards hope to get Delon Wright back in a couple of weeks, I’m told. Washington values him as a potential defensive stopper and closer in games when he returns healthy. Overall, I don’t see him being shopped by any means, but he’s a guy that has value around the league if Washington thinks it can make a notable upgrade.

Gozlan: One guy who’s not playing and fully healthy is Patty Mills… Mills’ role has declined in Brooklyn with Kyrie playing, Simmons, and Seth Curry there. Edmond Sumner also has been ahead of him in rotation. He has another year left on his deal.

Scotto: I don’t see Mills being moved due to his connection with Ben Simmons as a mentor and friend, along with his ties to Sean Marks as a culture guy… Someone joked with me at Barclays recently that when Mills retires, he could easily work for the Nets. Apparently, he’s got a decent relationship with Joe Tsai as well. I don’t think he’ll ultimately get moved.

Scotto: Minnesota is reluctant to move Jaden McDaniels, so the only real pathway to a trade is moving D’Angelo Russell’s expiring contract or a move around the edges with Kyle Anderson or Bryn Forbes being moved for a bench upgrade.

Gozlan: Generally speaking, I’m not seeing any deal for the Wolves after trading all their picks for Rudy Gobert. They’re kind of stuck. I think they’ll play better than what they started.

Gozlan: This is somewhat of a hot take, but I’d keep an eye on Isaiah Hartenstein. If the Knicks don’t get consistent, maybe they decide to sell off some of their veterans. He’s got one of the more movable and team-friendly contracts.

I think New York has to win, given where they’re at in their rebuild process and getting Jalen Brunson. They didn’t build this team to tank.

Scotto: In free agency, Mike Muscala drew interest from about 10 teams across the league. If a team is looking for a backup stretch five for a playoff run, Muscala could appeal to teams. Spurs big man Gorgui Dieng is also a trade candidate for similar reasons.

Gozlan: The Celtics have several trade exceptions but also a $66 million luxury tax bill. Trading Gallo for an equal salary player seems to be the most cost-effective way to strengthen the roster. They can take back up to $8.2 million for him in a trade. They could attach a minimum salary to get higher-priced guys.

Gozlan: The only other guy I’d keep an eye on is Joe Ingles… His $6.5 million salary, and if the Bucks want to bring someone in with a significant salary, they can combine him with maybe Grayson Allen’s $8.5 million salary and George Hill’s $4 million salary.